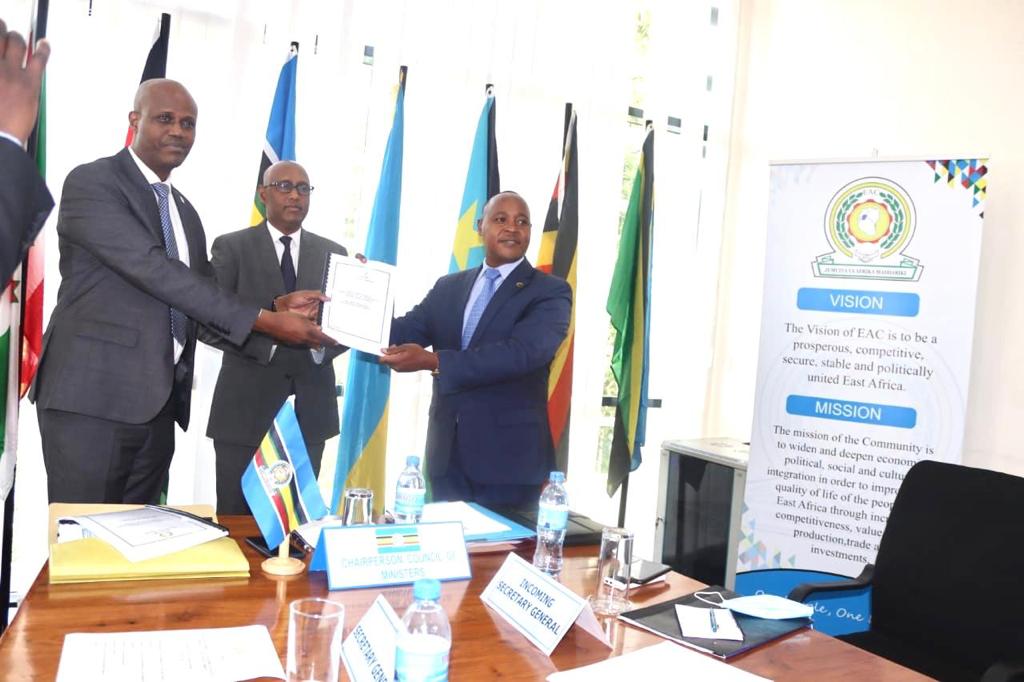 The East Africa private sector is upbeat on the expansion of trade and investment in the region and a rejuvenated and progressive bloc, following the assumption of office of Dr. Peter Mutuku Mathuki, as the new East African Community (EAC) Secretary-General.

Dr. Mathuki, an ardent champion for the inclusion of the private sector into the regional integration agenda, has this afternoon officially taken over as the new EAC Secretary-General, for a five-year term, at the EAC Secretariat headquarters in Arusha, Tanzania.

“Strengthening mechanisms to resolve persistent Non-Tariff Barriers (NTBs) that hamper intra EAC trade, deepening implementation of the Common Market protocol and restructuring the EAC Secretariat to achieve the mandate envisaged in the Treaty are some of my key priorities,” he noted in his inauguration speech.

In his first year in office, Dr. Mathuki, outlined that he will prioritise the full operationalization of the amended EAC Elimination of Non-Tariff Barriers Act and the EAC Trade Remedies Committee to handle persistent trade disputes in the region.

Adoption of an EAC-coordinated approach in harmonizing COVID-19 testing charges, fronted by the private sector through EABC, will also take a front seat.

“Putting in place economic recovery response mechanisms, digitalization and coordinated approach on COVID-19 response measures which include allocation of testing facilities at all EAC border posts is instrumental in mitigating the trade disruptions and losses brought forth by this pandemic,” Dr. Mathuki said.

The private sector has also been pushing for the finalization of the comprehensive review of the EAC Common External Tariff (CET) and rules of Origin since 2016. These issues are among his focus areas in a move set to boost value addition and industrialization in the region and protect the regional value chain sectors.

In his inaugural speech, Dr. Mathuki emphasized that he was keen on steering the commitments on the free movement of goods and services and people as envisaged in the Common Market Protocol to boost intra- EAC trade which currently stands at about 15% to over 50% by the end of his tenure.

In his agenda for the region, the new Secretary-General also aims at focusing on harmonization of domestic taxes and standards and pushing for the adoption of the One Network Area (ONA) by all EAC Partner States to reduce the high cost of telecommunications across the region.

The EAC has a market access to more than 177.2 million people with a combined GDP of about USD200 billion. In a move to promote the region as a single investment destination, Dr. Mathuki noted that he would prioritize a condusive regional business environment and the implementation of single tourist visa that will entice more Foreign Direct Investments (FDIs) and spur investment.

The change of guard at the Secretariat is also set to see a revitalized Community with a promise by the new Secretary-General to deepen the Public-Private Dialogues and implementation of EAC Council of Minister’s directives on institutional restructuring.

As the EAC is one of the most integrated regional economic blocs in Sub-Sahara Africa, for Dr. Mathuki partnerships with international business networks remain crucial. As CEO of EABC he shaped together with the Federation of German Industries (BDI) the advocacy agenda for industrialization. “The region needs to strengthen its resources and capabilities for elevating its manufacturing basis. That is why EABC is grateful for the collaboration with GIZ Programmes implemented on behalf of the German Government such as “Business Scouts for Development” (a program for know-how transfer on SME-level), and the SEAMPEC “Support to East African Market and People Centered Integration” Dr Mathuki said. An example of this are skills development activities  for women-owned businesses in EAC Partner States conducted by EABC through its members in 2020 .

In his remarks during the inauguration Dr. Mike Falke, Country Director of Deutsche Gesellschaft für Internationale Zusammenarbeit (GIZ) for Tanzania and EAC, commended the role played by Dr. Mathuki in steering the successful long-term collaboration between GIZ and EABC. GIZ, is ready to continue supporting on behalf of the German Government regional economic cooperation, pandemic preparedness, health and digitization together with its partners in the EAC and the new Secretary General.