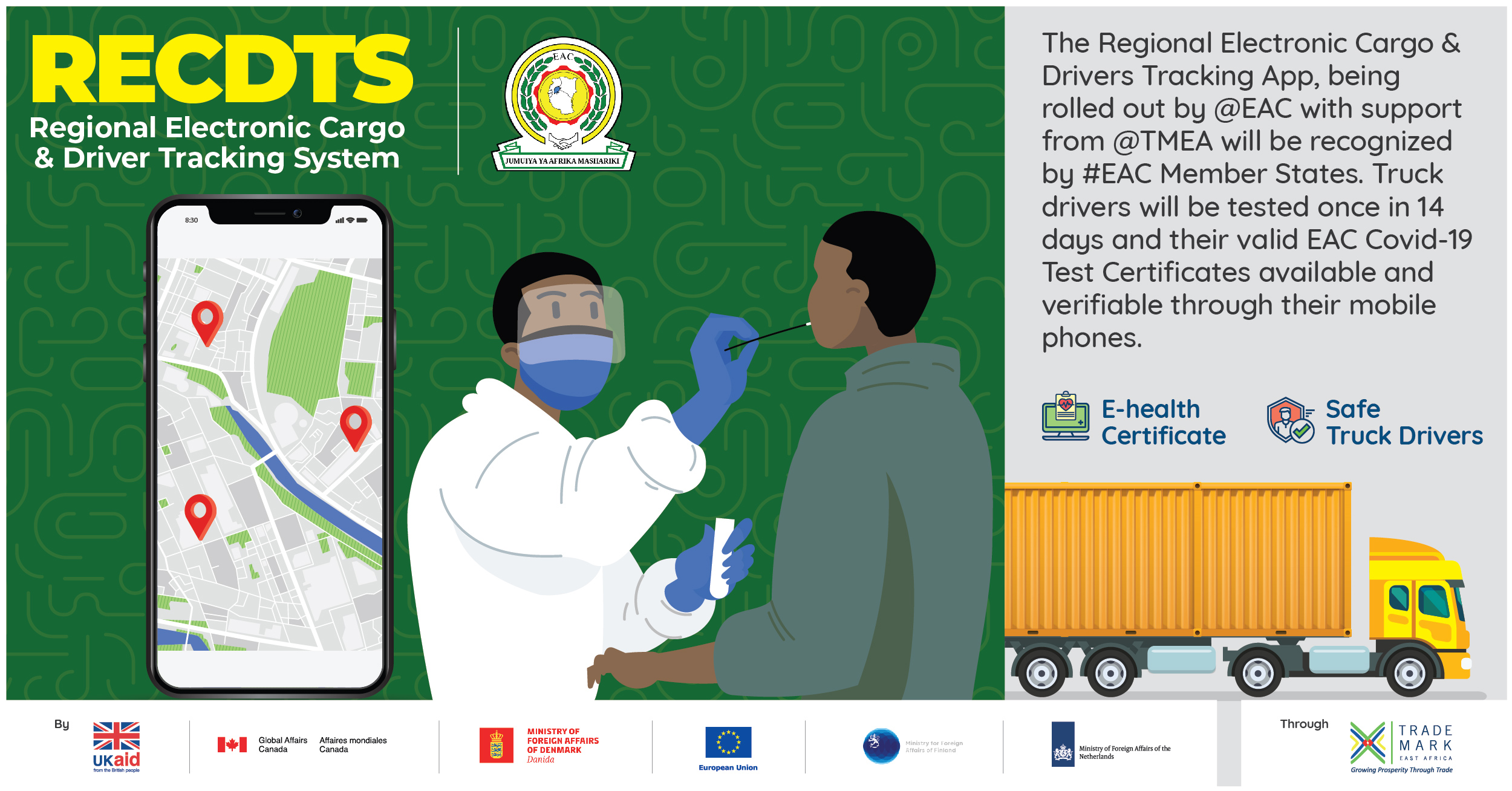 8th September, 2020: The East Africa Community (EAC) Secretariat and its Partner States held a virtual roll-out event to mark the technical completion and development of the Regional Electronic Cargo and Driver Tracking System (RECDTS). RECDTS is designed as a mobile phone application and will enable the issuance of the EAC COVID-19 digital certificates that are mutually recognised by Partner States, thus eliminating need for multiple testing as well as contributing to alleviating ongoing congestion at East Africa border crossing points.

The roll out was witnessed by the Chair of the EAC Council of Minister, Hon Prof Nshuti Manasseh, Ministers of Health from Kenya and Uganda as well as the EU Ambassador to Kenya, H.E Simon Mordue.

RECDTS provides a surveillance system to monitor long distance truckers crew health and enables contact tracing. It allows Partner States to electronically share truck drivers’ COVID-19 test results; therefore, minimising need for multiple COVID-19 tests in a single trip. The reliance on manual certificates and delayed test results at the borders has been reported as one of the main reasons of long delays at border points, such as those witnessed in Busia, Malaba, Nimule and Elegu. Some of the delays have caused tail backs of trucks measuring tens of kilometres in some cases.

The development of EAC the app with funding from European Union, Global Affairs Canada, Danida, Finland, Netherlands and United Kingdom through TradeMark East Africa was in accordance with the directive given by the 1st Joint Ministerial meeting of EAC Ministers responsible for Health and EAC Affairs.

Additionally, RECDTS will contribute to protecting lives, promoting safe trade and especially continuous flow of trade, support health related protocols and facilitate safe trade. RECDTS will be in use in all Partner States and will eventually be extended to EAC neighbouring countries, particularly Democratic Republic of Congo (DRC).

The Chair of the EAC Council of Ministers who also doubles as the State Minister for Foreign Affairs and International Co-operation, Republic of Rwanda, Hon Prof Nshuti Manasseh said the effective implementation of RECDTS is critical to trade facilitation in the region as well as the recovery of regional economies. The truck driver is critical in the supply chain of this region. “In this regard, I appeal to all stakeholders to look at the positive side of things and support the implementation of the system”.

Speaking at the roll out, the EU ambassador to Kenya H.E Simon Mordue said “A common approach to tackling the threat of Corona Virus to the East African Community’s economy is paramount. The RECDTS platform is an example of this solution, as it enables several ministries of health in the region to work together in stemming the spread of the virus across borders.” Ambassador Morude also noted that the RECDTS will provide an efficient, transparent and accessible way to support the formal trade across the EAC borders and will help in sustaining the EAC economies, now and in the near future.”

On his part, the EAC Deputy Secretary General in-charge of Productive and Social Sector, Hon Christophe Bazivamo commended the progress in the development of the RECDTS remarking, “today’s roll out proves that coordinated action at the regional and even continental level is possible, especially as we start implementation of the Africa Continental Free Trade area. This kind of coordination is evidence that we can regulate flow of trade, safeguard livelihoods and achieve competition and quality.”

Frank Matsaert the Chief Executive Officer of TMEA said that the current pandemic has in many ways revealed how crucial the facilitation of trade is in times of crisis. It shows us that trade must become more fluid so that producers are able to access markets.

The task of ensuring that imported goods reach consumers lies in the hands of truck drivers; and as the coronavirus spread in the region the transit corridors were identified as conduits for the spread of infections. In efforts to contain the spread of COVID-19, the health authorities developed protocols requiring truck drivers to be tested.

RECDTS will resolve some of the challenges that were being experienced in execution of health protocols including: Multiple testing of truck drivers at border crossing as there lacked a framework of mutual recognition; Documentary fraud; where truck drivers would forge national certificates and use them to cross borders. Conflicting test results – this would happen when the same driver tested in one country having negative results, would be declared positive after being tested again in another country.

The system is expected to be in use in all the EAC Partner States – Burundi, Kenya,Rwanda, South Sudan, Tanzania, and Uganda – and extended to EAC neighbouring countries particularly the Democratic Republic of Congo (DRC).

The RECDTS and its related components are a set of digital-based solutions aimed at:

The East African Community (EAC) is a regional intergovernmental organisation of 6 Partner States: the Republics of Burundi, Kenya, Rwanda, South Sudan, the United Republic of Tanzania, and the Republic of Uganda, with its headquarters in Arusha, Tanzania.

TradeMark (Trade and Markets) East Africa is an aid-for-trade organisation that was established in 2010, with the aim of growing prosperity in East Africa through increased trade. TMEA operates on a not-for-profit basis and is funded by the development agencies of the following countries: Belgium, Canada, Denmark, Finland, Ireland, Netherlands, Norway, United Kingdom, United States of America as well as the European Union. TMEA has its headquarters in Nairobi, Kenya, with successful operations and offices in EAC-Arusha, Burundi (Bujumbura), Tanzania (Dar es Salaam), Democratic Republic of Congo (Bukavu), Ethiopia (Addis-Ababa), Malawi, Zambia, South Sudan, Uganda (Kampala) and Rwanda (Kigali). To find out more, please visit our website www.trademarkea.com