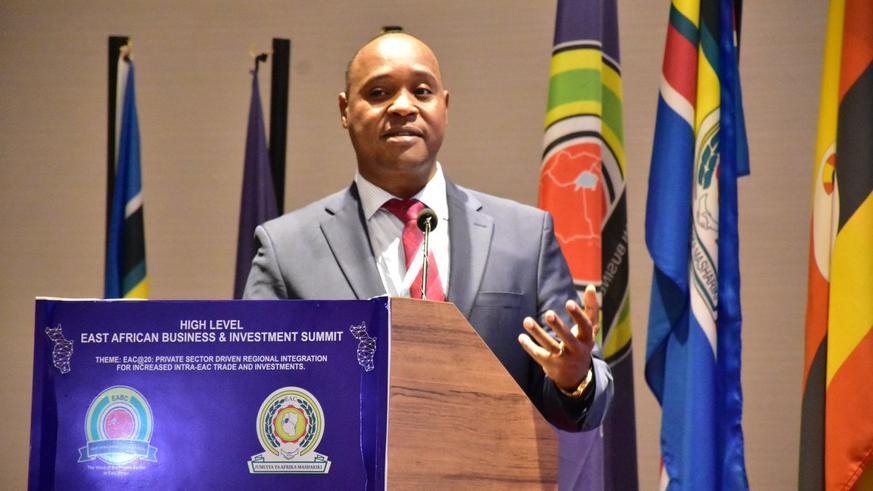 Rwanda’s private sector players are optimistic of increased intra-regional trade in the East African Community (EAC), following the change of leadership at the bloc’s Secretariat, which took office last month.

Speaking during a roundtable dinner for CEOs, organized by the East African Business Council (EABC) on May 7 in Kigali, Rwandan businessman Dennis Karera outlined several issues that upset the smooth flow of trade in the region, and called for action towards addressing them.

Among the issues, he mentioned the persistent non-tariff barriers, an uncoordinated approach in handling Covid-19 and unharmonized tax regimes as issues stifling intra-EAC trade which currently stands at about 15%.

Describing Peter Mathuki, the new secretary General of the EAC as “an ardent supporter of the private sector,” Karera said he is confident that he will fast-track implementation of the many issues disrupting intra- EAC trade.

Before being appointed EAC Secretary-General earlier this year, Mathuki was the executive director of the EABC.

The private sector players are also urging the EAC Secretariat to champion the conclusion of the review of the EAC Common External Tariff (CET), aimed at facilitating industrialization and regional value chains in the East Africa Community.

Karera called upon the secretariat to engage partner states to commence the actual process of harmonization of domestic taxes.

“We urge for the prompt harmonization of excise duties and Value Added Tax (VAT) followed by Income Tax and ultimately, tax incentives,” he said.

To resolve persistent non-tariff barriers, the players also called for the finalization of the amendment of EAC Elimination of Non-Tariff Barriers Act, 2017, as well as the activation of the Dispute Resolution Mechanism by operationalizing the EAC Trade Remedies Committee.

It is about 11 years since the EAC Common Market was established, however, restrictions on the movement of services and service providers continue to disrupt the EAC regional integration agenda, and reduce cross-border trade.

Other issues that the private sector is advocating for include; ratification of the Sanitary and Phytosanitary (SPS) Protocol, review of EAC Rules of Origin, 2015, and quick admission of the Democratic Republic of Congo to expand the market for products made in the EAC region.

Besides this, fast-tracking of the creation of the One Regional Air Space for East Africa (Skies) and air cargo liberalization within and out of the EAC region to bring down the cost of air transport in the region is also looked at as a priority for the private sector.