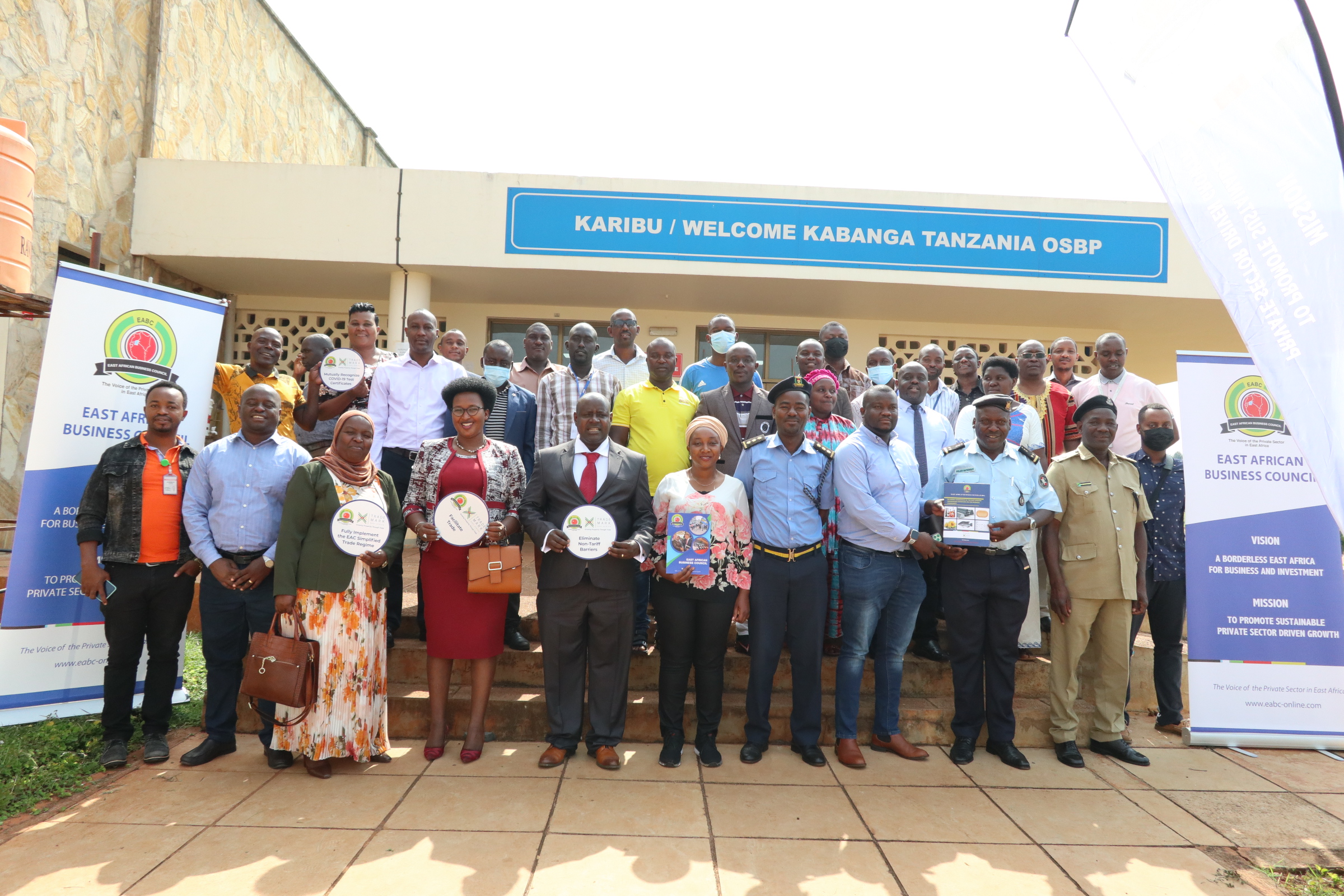 Sunday, 30th January 2022, Kabanga, Tanzania: The East African Business Council (EABC) CEO Mr. John Bosco Kalisa has called for 24hrs service operations to be piloted at Kabanga/ Kabero One-Stop Border in a bid to ease the movement of cargo and persons between Tanzania and Burundi.

Mr. Kalisa said improving infrastructure, promoting consumption made in East Africa goods & services, boosting trade facilitation and product diversification is key to transformation, resilience and growth of the EAC bloc into a middle status economy amid the COVID -19 pandemic.

On his part, Mr. Charles Omusana Principal Economist from the EAC Secretariat said business should be facilitated as EAC integration is people-centered and private sector-led.

Madame UWINGABIRE Amida, a cross-border trader and member of the Traders Association of Burundi (ACOBU) called for the harmonization of COVID-19 testing charges. She explained that on the Burundi side COVID-19 testing costs 15,000 Burundi Francs while on the Tanzania side is free of charge.

She emphasized that the pandemic reduced their cash flow resulting in delays in remitting loans payments and eventually collapse of businesses. She appealed to the Government of the Republic of Burundi to reduce loan interest rates.

The traders urged the Regional Police Commander (RPC)   to remove the checkpoint for sanitizing vehicles placed 2 KMs from the  Kabero border. The traders said, “Sanitation of vehicles at the checkpoint only needs health officials hence other trade facilitation officials such as military and police should not be involved.”

The traders also appealed that all vehicles exporting perishable goods such as fruits from Burundi to Tanzania should be given a green light on all police checkpoints along the route to boost trade and reduce the cost of doing business.

Bobby Ndizeye, the representative of EAC Ministry in Burundi, thanked EABC for organizing the Public- private dialogue where the Government officials and traders discussed issues that hinder trade in EAC. He said that the Government of Burundi together with the associations of traders will take all the traders ‘concerns to the decision makers.

The public-private dialogue recommended for implementation of the EAC Simplified Regime,     more trade facilitation staff to be deployed to fast track 24hr operations at the border, creation of Burundi -Tanzania cross border association, joint border management committees to be held monthly, automation of customs and clearing processes and improvement of the road on the Burundi side, setting up trade information center, empowering Burundi border officials to make decisions, adoption of One Network Area on Telecommunication and use of National Identity Cards as travel documents.