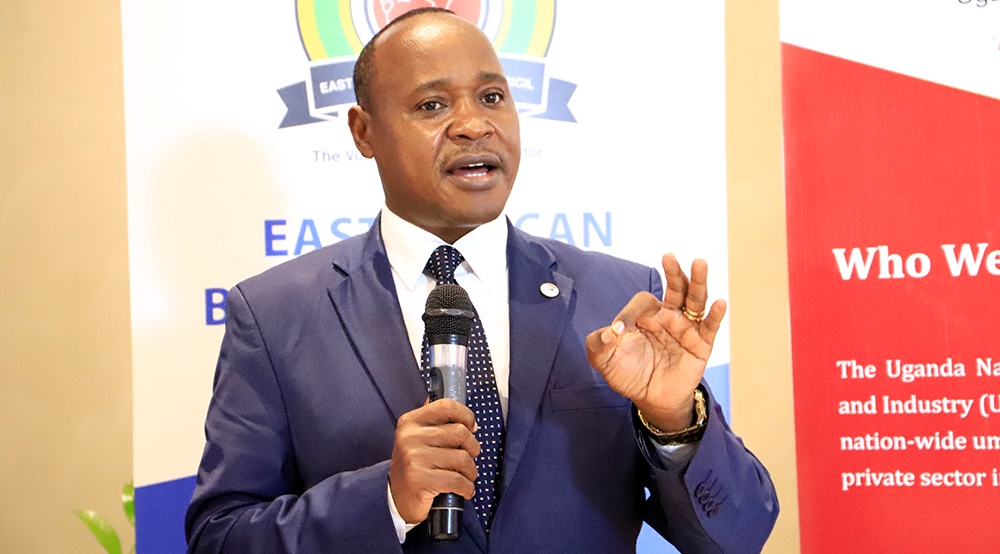 Thursday, 13th May 2021, Arusha, Tanzania: Uganda private sector players are upbeat on prompt interventions on market access challenges for their goods and resolutions of persistent trade barriers across the region, following the commitment by the new EAC Secretary General, Dr. Peter Mutuku Mathuki , in steering a private sector driven regional integration process to increase intra EAC trade.“ The EAC Secretariat will be making a visit across all EAC border points in the next 6 months to resolve issues affecting cross border trade and deliberate on sustainable solutions to facilitate the flow of goods and movement of person,” Dr Mathuki said.

The newly appointed Secretary General was speaking on Thursday, 13th May 2021, during a CEO roundtable breakfast meeting organized by the East African Business Council, at Skyz Protea Hotel in Kampala, Uganda.Dr. Mathuki was accompanied by the EAC Deputy Secretary General in charge of Productive and Social Sectors, Hon. Christophe Bazivamo and EAC Director General of Customs and Trade, Mr. Kenneth Bagamuhunda.

The business leaders called for the finalization of the amendment of the EAC elimination of Non-Tariff Barriers Act, 2017, in a move set to reduce transaction costs hence boost intra EAC trade.“The activation of a dispute resolution mechanism through the operationalization of the Trade Remedies Committee and harmonization of EAC Partner States laws are some of the issues we are urging the EAC Secretariat to fast track,” said Mr Gideon Badagawa- Executive Director, Private Sector Federation Uganda (PSFU).

The new Secretary General also stated that the EAC Secretariat is now in the process of constituting a verification mission to the Democratic Republic of Congo (DRC) in accordance with the EAC procedure for admission of new members as directed in the 21st Ordinary Summit of the East African Community Heads of State.“With a population of over 80 million people, DRC provides a vast market for goods that EAC SMEs can tap into,” he said.According to a study by the East African Business Council in collaboration with GIZ Creating Perspectives Project titled; ‘The opportunities for trade in the Democratic Republic of Congo’, despite DRC sharing borders with the EAC, the bloc only has a share of 11.5 percent of total DRC imports, with China as the top exporter to the country commanding a share of 31.2 percent, followed by South Africa at 15.8 percent and Zambia at 13%.In his remarks, EAC Director General of Customs and Trade, Kenneth Bagamuhunda stated that the United Republic of Tanzania had shared a letter to the EAC Secretariat expressing interest in joining the One Network Area (ONA).

“The adoption of the One Network Area (ONA) model by all EAC Partner States is set to reduce the high cost of telecommunications in the region,” he said.The meeting under the theme, ´Enhancing a Private Sector led Integration & Emerging opportunities in East Africa´ was well attended by industry captains from institutions such as the Uganda Manufacturers Association, Uganda Law Society and Uganda National Chamber of Commerce and Industry among many others.